If vegetarians want to change the world, because they long for a harmonious society, they should not create animosity towards their cause. Sadly enough, some people dislike vegetarianism associations because of how certain vegetarians defend their cause.

After being a vegan for seven years, I became a flexitarian. Giving up my vegan diet wasn’t easy. When I had serious problems with my digestion, a doctor recommended me to do so. Although he was a vegetarian, I didn’t accept his advice. I only gave up my vegan diet after my mother told me I had become very cranky and suddenly realized that I was bad publicity for the vegan cause.

My original plan was to recover my vegan diet as soon as my digestion improved. Including again animals in my diet made me feel uncomfortable. I dreamed about having started smoking again because I associated returning to my old diet with picking up again an old bad habit.

Thanks to my flexible diet of the last fourteen contact with non-vegetarians has become much easier. Friends and acquaintances have often asked me why I became a vegetarian. When I told them about my moral objections, they felt that I judged their diet, and therefore judged mine. Although I have learned to refute ridiculous arguments such as: “If you stop eating animals because they are alive, you also have to stop eating plants because they are also alive”, they almost never grasped my reasoning.

Talking about vegetarianism with people who are unable to question their omnivore diet makes no sense. Therefore, when nowadays people ask me why I am a vegetarian I suggest that read Eating Animals by Jonathan Safran Foer. The fact that my friends do not feel the same empathy doesn’t bother me because I know that vegetarianism is picking up among the new generations and they are the future.

Although I have met a lot of vegetarians, I don’t know of anyone else who gave up eating other creatures because of the Bible. When I was almost forty years, and suffered a serious midlife crisis, I felt that I had to become a vegetarian. Since I was questioning everything because of my crisis, I investigated where my subconscious got that idea from. I discovered it had to do with my early childhood and the kindergarten teacher who had talked about Adam and Eve in the days of paradise. 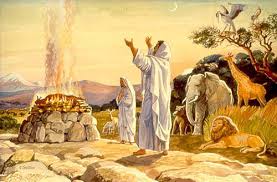 This young woman had told us that in paradise we were friends with the animals, and that after we got expelled from paradise, we began to suffer a lot of misery. This had made me come to the conclusion that to be allowed back into paradise, we had to stop eating animals. I was very proud for having found the solution, but a few minutes later I thought I had to be wrong because I assumed that adults knew everything better and they made me eat animals. 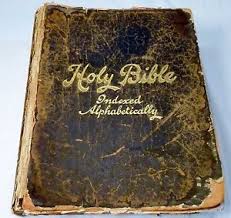 When some thirty years later I remembered that experience, it surprised me that the Bible has a vegetarian message. When I read that book I discovered that God prescribed Adam a vegetarian diet, “I give you every seed-bearing plant on the face of the earth and every tree that has fruit with seed in it for food.” Jews and Christians, who regard this book as sacred, eat other creatures because after the great flood God said to Noah, “Everything that lives and moves will be food for you. Just as I gave you the green herbs, I now give you everything.”

An attentive reader realizes that this second dietary law allows people to eat whatever creature – including other people –and that the words: “just as I gave you the green herbs” refer to the first dietary law, “ When he reads that first passage again, he finds that the green herbs were not given to Adam and Eve, but to the beasts, “And to all the wild animals on earth, and to all the birds of heaven and all the living creatures that creep along the ground, all the green herbs I give them as food.” Therefore, this second dietary law tells us that God considers that those who eat other creatures are not humans, but beasts. 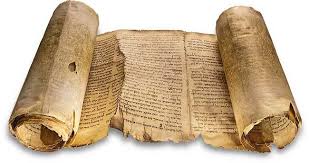 Immediately afterwards God said, “But you must not eat meat with its soul, which means with its blood, and I will demand an accounting. I will demand your soul from every animal, and from each man too, I will demand the human soul.” This implies that people can recover their human soul by eating other creatures. Whereas vegetarians have already done so, omnivores still have to achieve this.