People associate vegetarianism with Hinduism and Buddhism, but ignore that the story of Adam and Eve, which Jews, Christians and Muslims are familiar with, associates a harmonious society with a vegetarian diet.

The Bible says that in the days of paradise God prescribed Adam a vegetarian diet, “I give you every seed-bearing plant on the face of the earth and every tree that has fruit with seed in it for food.” Jews and Christians, who regard this book as sacred, eat other creatures because after the great flood God said to Noah, “Everything that lives and moves will be food for you. Just as I gave you the green herbs, I now give you everything.” 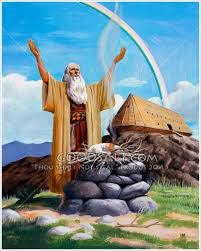 An attentive reader realizes that this second dietary law allows people to eat whatever creature – including other people –and that the words: “just as I gave you the green herbs” refers to the first dietary law. When we read that first passage again, we find that the green herbs were not given to Adam and Eve, but to the beasts, “And to all the wild animals on earth, and to all the birds of heaven and all the living creatures that creep along the ground, all the green herbs I give them as food.” With this second dietary law God tells us that He considers that those who eat other creatures are not humans, but beasts.