A BOOK THAT HOLDS SECRETS

Originally, they called a book ‘sacred’ when it held secrets –sagrado and secreto are derived from the Latin verb segregare– and called the study of such books ‘religion’ –the Latin verb legere first meant to unite and later to read– because to discover its secrets one had to read them over and over again.

A BOOK OF WISDOM

Wisdom has nothing to do with having lots of information, but with processing it right; with investigating how each new idea affects all ideas that we are already familiar with.

The Bible is a book of wisdom because its stories invite us to formulate questions whose answers lead to new questions, creating that way a dynamic that helps us to continually improve our understanding of ourselves and the world we live in.

Since it is because we struggle for resources that today we have an industry that slowly makes our planet inhabitable, and nuclear arms that at any moment can put an end to our civilization, we can conclude that a society that doesn’t live in harmony is bound to destroy itself.

The Bible recognizes this reality: 10 generations after putting an end to harmony (paradise), for eating a forbidden fruit, a terrible catastrophe occurs (the flood), that only 4 couples of human beings survive. Asking why we have conflicts with others and with the environment is the same as asking what the forbidden fruit refers to.

The ages of the patriarchs are remarkable as one assumes that they were our ancestors, and neither the years they had when begatting their heir, nor the total amount of years they lived are similar to ours. Their long life spans imply that many patriarchs coincided in time and may have known each other. An example is Noah, who may have known the 18 generations between Enosh and Abraham.

Instead of accepting these figures, the way believers do, or rejecting them, the way non-believers do, it makes more sense to investigate whether we ignore something about them. The Bible itself offers us reasons for investigating them. One is that God said to Adam that he would die if he ate the forbidden fruit and later he ate and still lived another 800 years; another is that before the flood God said, “My spirit won’t stay in men forever, let his days be 120 years” and later the patriarchs continue to get much older.

SECRET 4: THE GENEALOGIES IN THE OT

The Bible pays a lot of attention to the genealogies of its protagonists. To understand them one has to realize that, due to extramartital relations, lineages can be real or supposed. This is why Jews consider that someone is a Jew when his mother is one.

The Bible bases real lineages on the ‘father begat son’ principle, and supposed lineages on formulas such as ‘Kain knew his wife and she conceived and gave birth to Enoch’ or ‘to Enoch was born Irad’. Supposed lineages offer additional information regarding real lineages, which enables to draw a family tree that holds several cases of extramarital relations and of incest and endogamy.

The names Enoch and Lamech, that appear both in the genealogy from Adam to Noah and in the one from Kain to Jabal, refer to the same people. The fact that the first genealogy says that Jared begat Enoch, while the second genealogy says that Kain knew his wife and she conceived and gave birth to Enoch, encourages us to investigate whether perhaps Jared begat Enoch from Kain’s wife. Due to the patriarches’ long life spans – Noah had Shem when he was 500 years – the 5 generations that separate Kain and Jared are not an obstacle.

SECRET 5: THE GENEALOGIES IN THE NT

These lineages can again cross each other. The Bible suggests that the lineage of Adam’s father (God), after crossing again with the same female lineage first every 7 generations and later every 13 generations, attracted a special spirit: Enoch walked with God; Abraham received an alliance from God, David was the most famous king of the Jews; Josiah imposed an important religious reform; and Jesus created a new monotheist religion that conquered a large part of the pagan world.

God forbade Adam to eat from the tree of the science of good and evil, warning him that the day he ate he would die for sure. The serpent convinced Eve to eat the forbidden fruit, telling her that that they would not die, but that their eyes would open and they would be like gods who know what is good and evil. Later they ate and didn’t die –Adam still lived another 800 years– but their eyes opened and they realized they were naked.

If God refers to the generation prior to Adam, being like Gods can be interpreted as becoming an adult and thus aware of one’s sexuality. It was not that before eating the forbidden fruit they were blind, but that later they became aware of their nakedness and were ashamed of it.

The fact that after eating the forbidden fruit Adam lived another 800 years demonstrates that God didn’t refer to Adam and Eve’s physical death. Although we tend to associate immortality with never dying, we can also associate it with the capacity of remembering previous lives. If Adam and Eve stopped remembering them after eating the forbidden fruit, they didn’t die physically, but spiritually. By no longer being conscious of their past lives, they were no longer aware that after death they reincarnated, so that from that moment on the fear for death marked their lives.

Only when one realizes that a society that doesn’t live in harmony is bound to destroy itself can one understand the figure of the Messiah: the person who restores harmony on Earth. The first Christians considered that Jesus was the Messiah because they assumed that at the end of times his Second Coming – his reincarnation – would restore harmony thanks to a revelation: the Greek word apocalypse, that we nowadays associate with the end of times, means revelation.

Today our habitat is close to becoming uninhabitable; there is a lot of anger on a world level; and at any time nuclear arms can cause a great catastrophe. This makes that we can finally understand the ultimate consequence and the ultima cause of struggling for resources; of not living in harmony.

The most important lesson

Bruno Lernout (April 8th,1957, Duffel/Belgium) is a self-taught linguist, historian and philosopher who became interested in the Bible after having a mystical experience when he was almost 40 years old.

He has lived in Spain since 1978 and in Arzúa (Galicia) since 2014. For almost 25 years he has worked as a guide on walking holidays, accompanying groups of North American on different trails in Spain, like, for instance, the Camino de Santiago; and of groups of Spaniards on Silk Road expeditions through Central Asia. 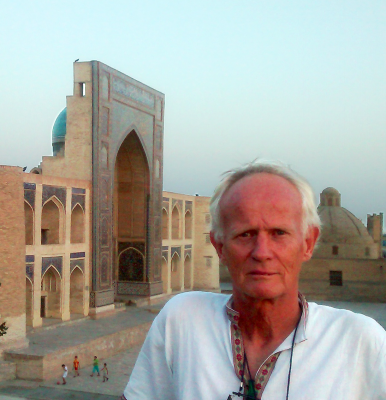 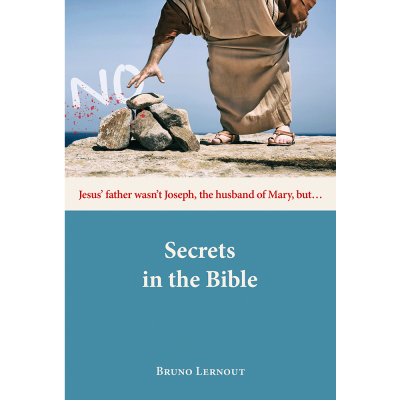 Secrets in the Bible
Paperback book of 228 pages (English or Spanish) 20,00€ (VAT included).
Download the book FOR FREE in PDF, Epub, AZW3 format.

Who said that Jesus was born from a virgin?
16 pages Booklet (12 languages) 2,00€ (VAT included).
Download the booklet FOR FREE in PDF, Epub, AZW3 format.

WELCOME TO SECRETS IN THE BIBLE.

This website uses cookies to improve your experience while you navigate through the website. Out of these, the cookies that are categorized as necessary are stored on your browser as they are essential for the working of basic functionalities of the website. We also use third-party cookies that help us analyze and understand how you use this website. These cookies will be stored in your browser only with your consent. You also have the option to opt-out of these cookies. But opting out of some of these cookies may affect your browsing experience.
Necessary Always Enabled
Necessary cookies are absolutely essential for the website to function properly. This category only includes cookies that ensures basic functionalities and security features of the website. These cookies do not store any personal information.
Non-necessary
Any cookies that may not be particularly necessary for the website to function and is used specifically to collect user personal data via analytics, ads, other embedded contents are termed as non-necessary cookies. It is mandatory to procure user consent prior to running these cookies on your website.
SAVE & ACCEPT