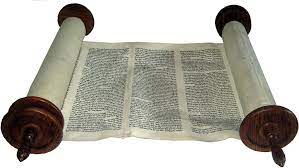 Genesis is the most complex and important book of the Bible: Judaism, Christianity and Islam base their comprehension of the origins of the universe and of mankind on this book. By telling us that at a certain moment our ancestors lived in harmony (paradise) it offers mankind an ideal to strive for.

The main message of Genesis is that a society that doesn’t live in harmony is bound to destroy itself: 10 generations after the end of harmony (the expulsion from paradise), for changing their diet (eating a forbidden fruit), a great catastrophe (the flood) put an end to almost the whole of mankind,.

When one reflects upon mankind’s evolution, one realizes that this idea is correct: inventions continually become more sophisticated and allow an ever smaller percentage of the world population to appropriate an ever bigger percentage of all the resources. This increases the tension between different groups of people and between them and their environment.

To avoid the imminent self-destruction of our society –due to a nuclear war or an industry that continually makes our habitat less inhabitable– we must establish harmony on Earth.

Asking why we have conflicts is the same as asking what the forbidden fruit refers to. The fact that in the days of paradise no other laws were necessary, except for staying away from the forbidden fruit, indicates that eating it initiated a chain reaction that continually took mankind further away from harmony. The forbidden fruit thus has a lot in common with drugs that make one lose control, so that one commits crimes that cause traumas which lead to more crimes.

The main message of Genesis encourages one to read its stories over and over again. When one does so with humility and a questioning mind, and without letting oneself be guided by the interpretations of believers, or by the prejudices of non-believers, one finds a lot of wisdom in them.

The series of articles PHLOSOPHY versus THEOLOGY in the blog secretsinthebible.com defend the idea that the Bible was written for people who seek the truth, but has traditionally been interpreted by people who presume to know the truth.

They are based on the following principles:

1-Blind belief in authority –the Bible– is the greatest enemy of truth.
2-Not all the books of the Bible have the same dynamic.
3-Certain texts of the Bible were written by people very different from those who interpret them today.
4-The first thing one assumes a text says is not necessarily what it really says.
5-Certain ideas that people believe are in the Bible are not in the Bible.
6-Science may only contradict a particular interpretation of the Bible.
7-The Bible helps us reflect upon reality, but does not necessarily reflect reality.
8-The Bible encourages us to ask questions whose answers lead to new questions, thus creating a dynamic that continually permits us to improve our comprehension of the themes involved.
9-When an idea in the Bible doesn’t make sense, perhaps we don’t yet understand it.
10-Accepting an idea that goes against reason or against our conscience makes no sense.
11-Since new ideas continually contradict older ideas, it makes sense to question scientific ideas too.
12-Reading the Bible without getting influenced by the interpretations of theologians is as difficult as reading it without getting influenced by the prejudices of agnostics and atheists.

Since I spend a lot of time writing these articles, but neglect social media, I would like to ask you to recommend my website to those that may find it interesting.

The next 10 articles are:

This website uses cookies to improve your experience while you navigate through the website. Out of these, the cookies that are categorized as necessary are stored on your browser as they are essential for the working of basic functionalities of the website. We also use third-party cookies that help us analyze and understand how you use this website. These cookies will be stored in your browser only with your consent. You also have the option to opt-out of these cookies. But opting out of some of these cookies may affect your browsing experience.
Necessary Always Enabled
Necessary cookies are absolutely essential for the website to function properly. This category only includes cookies that ensures basic functionalities and security features of the website. These cookies do not store any personal information.
Non-necessary
Any cookies that may not be particularly necessary for the website to function and is used specifically to collect user personal data via analytics, ads, other embedded contents are termed as non-necessary cookies. It is mandatory to procure user consent prior to running these cookies on your website.
SAVE & ACCEPT